Police have released an image of five men they believe may be linked to an assault at the Kingston Foreshore last month.

Officers responded to reports two men had been attacked on Eastlake Parade at around 11:30pm on November 19.

A number of vehicles were also damaged.

Police have already spoken to some witnesses but believe there may have been more people in the area.

Anyone who recognises the men or has further information that could help with the investigation is being urged to contact Crime Stoppers on 1800 333 000. 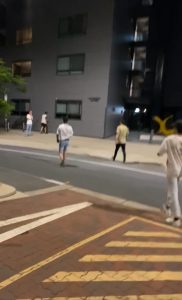